It’s Not about the Breasts 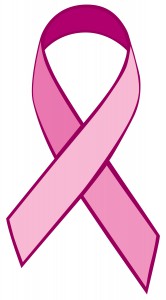 October is Breast Cancer Awareness Month. Lots of places turn pink for awareness, but I don't know exactly what this “awareness” is supposed to accomplish. We're now “aware” that grown men tackling other grown men while wearing pink uniforms is - uh - different, and that cars zooming around a racetrack with pink paint schemes bring back memories of Pepto-Bismol. In our sex-obsessed society, it almost seems as though it's Breast Awareness Month. “Save the Ta-Tas!” “Save Second Base!” (Although I do have to admit that the one with two bees dressed like ghosts, with the caption “Save the Boo Bees,” is quite creative.) Certainly many Halloween costumes accentuate the fact that their wearers still possess them; but, again, I don't think that's the awareness this month is really meant to bring about.

The issue at stake with breast cancer, as anyone who has ever had it, or had a loved one or friend who had it, is the same issue at stake in nearly every other thing that has “cancer” in the name. It's your life. According to the NIH's National Cancer Institute, there have been around 232,000 cases of breast cancer found in 2013, with 40,000 of those resulting in death; but that's just for females. Males are responsible for another 2,200 cases of cancer and 400 deaths. That puts the death rate at 17% of women and 18% for men; for women, this is the #1 or #2 cause of death from cancer, depending on your ethnic heritage. The breast cancer survivors I know would give their breasts up in a heartbeat (and I believe that all of the ones I know have) to be rid of the cancer, and live to see their children grow.

The death rates are decreasing, which is good. Awareness is leading to action. That's really the key - a change of behavior based on the knowledge acquired. Both men and women can benefit from regular self-examinations; if something feels different, get it checked out. It's not just a lump of flesh at stake.

Only a month late (when I originally wrote the bulk of this - now it's more like 8 months late), this is the 8th annual “Sanctity of Human Life” post. It's going to be a long one; please don't TL;DR it. There's too much to this topic to do it justice in 5 paragraphs, and putting it out in parts would invite debate and assumptions about the parts I'd left out. This post is free of my typical snark, and also free of (atypical for me) hyperbole; I am completely serious, and have reviewed my words to ensure they are the ones I intended to use. The premise is simply this - abortion is morally wrong (which we now know, given advances in medical science), and as such, should not be legal nor easy to obtain.

Let's start with the framework within which I view the issue. I believe that man was created by God and placed here on this planet to live for His glory, and that He has given us the earth for our pleasure and enjoyment. I believe that evil exists in this world, that bad things happen, and that actions have consequences. I generally believe (though not always) in erring on the side of caution. I believe that, as God's creation, all life is sacred. I believe that God has enabled man to discover many beneficial things in the area of medicine and health care, and I believe that He expects us to use this knowledge within the framework and principles laid out in His Word.

(I fully realize that many of you reading this may not agree with that framework. Feel free to debate about what appears below, but the above paragraph contains things that, for me, are past debate. I've heard the arguments against it, and I'm simply unconvinced.)

In looking back through my archives, the post entitled “Abortion: A Bad Idea Whose Time Has Passed” was my 5th post on this blog. In this post from 2003, I mentioned (without citing) the medical advances that had happened since 1973's Roe v. Wade decision. This page has a good description of what happens day-by-day. At 21 days (3 weeks), the heart begins beating. With ovulation occurring 14 days after menstruation starts, and another 14 until it's due to start again, a woman would likely not even realize she's late before her baby's heart is beating. 9 days later, at 30 days, this heart is circulating its own blood supply, completely separate from the mother's, thanks to the placenta. Day 35, we've got a 5-fingered hand, and on day 40, we have brain waves. By one and one-half menstrual cycles, we've gone from nothing to a beating heart and brain waves.

Let's look at what happens up to 12 weeks, which is when pretty much anyone who approves of abortion thinks it's OK. The liver starts making blood cells, and the brain is controlling the limbs in week 6. Week 7 brings the jaw, tooth buds, and eyelids. Week 8, and I quote, “the fetus has everything found in a fully developed adult,” including stomach acid and a complete nervous system. Fingerprints, fingernails, and hair appear in week 9. In week 10, “the fetus can bend, stretch, make fists, open hands, lift its head, squint, swallow and wrinkle its forehead.” Week 11 brings urination, and in week 12, the baby is breathing amniotic fluid, has sleep/awake cycles, and does exercises. All this knowledge has been gained due to ultrasound technology and other study.

Now, God, morality, and everything else aside - read those descriptions again. Does that sound like an unviable tissue mass? Sure, it's dependent upon its mother for sustenance, but how is that different from a newborn baby? It isn't - and that's what we've learned. It's not a blob of cells that represent an inconvenience, it's a new creation that has been entrusted to the mother. Even without counting abortion, an estimated 25-33% of pregnancies end in miscarriage or stillbirth (according to HopeXchange, an organization that help people cope with these types of losses). With numbers that high, it would seem to me that the tissue masses that are unviable are taking care of things themselves.

Respect for life is one of this country's core principles; “life, liberty, and the pursuit of happiness” are inalienable rights enumerated in the Declaration of Independence. Laws against murder are nearly universal, even in countries that cannot claim the God-seeking history that ours can. It is simple human nature that reasonable humans understand - it is wrong to take the life of another without cause. (This is not to imply that I am anti-death penalty or anti-military; there are limited times when life-taking can happen in a moral way.) With science again backing up Scripture, we see that the developing fetus is simply a pre-born baby that is being knit together in its mother's womb.

So now, let's look at the whole “safe, legal, and rare” thing, a phrase used by many pro-choice supporters to describe their desired state of abortion. It's a given that “safe” doesn't apply to the unborn baby - they suffer near 100% fatalities. (Yes, near.) But is abortion as we know it today safe for the mother?

Now, childbirth brings its own complications, to be sure; I don't mean to imply that birth is completely safe. However, birth does have the advantage of being how our bodies are designed to work. Given the risks, I believe abortion is unsafe for both mother and baby.

We've established unsafe; how about legal? We know that Roe v. Wade “legalized” abortion, but there are still laws regarding its practice. Different states have different laws; nearly all states permit abortion through the first trimester, and some allow it through the second trimester. Few permit it in the third trimester, and there is now a Federal law against “partial-birth abortion,” a practice so abhorrent I'm not even going to describe it here. But, do its practitioners follow these laws? Some do; others, like Kermit Gosnell (link gone) do not, and Lila Rose has made a career exposing the unethical and often illegal practices at the nation's #1 abortion provider, Planned Parenthood.

How about rare? Well, let's look at the statistics. In 2008, there were 1.2M, down a little from the previous year; however, births were also down 2%, to 4.2M births. So, we prevented 22% of the pregnancies from resulting in births. I would not consider something that happens between a fifth and a quarter of the time rare, and I don't think anyone else would define it that way either. What it comes down to is this: if it's safe and legal (as we've been told, and those who question are ridiculed), it won't be rare.

Now, let's contrast this with the opening paragraphs. Abortion is not safe; it kills the baby, and causes health problems from the ex-mother. It's not rare; it occurs in over 1 out of 5 conceptions. As a person with the beliefs I laid out above, this is an absolute no-brainer. God created our bodies to reproduce; it's a natural consequence of the act that leads to conception. The easiest way to avoid conception is to avoid intercourse (also advocated in Scripture for those who are not married), and the fruits of that intercourse are, time and time again, referred to as gifts from God.

As an American, I see 20% of two generations now cut down before they breathed their first breath. I see counselors having a very easy time convincing people not to have abortions, simply by using ultrasound to show these ladies the life that is living inside them. I hear of post-abortion counseling groups with waiting lists. Have we aborted the person who was to find the cure for cancer? The scientist who was to determine how to produce food in desolate regions? The person who was to invent the flying car? Who can say what the long-term consequences have been for our folly of convenience.

It's not safe. If it's made illegal, only then can we hope to make it rare.