I’m Not a Mac, but I’m Certainly Not PC

Did Bob Costas really refer to a black European Olympics medalist as an “African-American?” What kind of mindless politically correct stupidity is that?

And while we're on the subject, if an “African-American” who is actually from the United States wins a medal, how do the Olympics officials decide which African country gets to share the credit for that medal? Just wondering.

Still more ... if an African-American wins a gold medal, what national anthem do they play? Have they created some kind of medley?

One of the funniest things I remember was hearing someone referring to a person from Africa as an “African-American African.” It certainly does seem that, when exposed to global culture, the American PC-ese seems to range from misguided to offensive. The same people who cry the loudest over discrimination over ethnic origin are also the same people who make sure we can't look past ethnic origin, thereby making all people equal.

Somewhere, we seem to have swallowed whole the lie that what someone else says about us has to be true. If someone calls you ugly, are you ugly? If someone calls you mean, are you mean? If things worked like that, I'd just pay someone to call me a 6-foot, 3-inch Harrison Ford look-a-like!

Now, I'm not ignoring our country's trouble past when it comes to true equality, but I'm also not convinced that affirmative action and political correctness have gotten us any closer to that equality. To suggest that someone be color-blind is ridiculous; on the other hand, differences are not generally liabilities. This infatuation with words, though, is a trickier thing. Freedom of speech is important, as evidenced by its being enshrined as Article 1 in the Bill of Rights, yet political correctness is the complete opposite of this. If jerks are not allowed to say jerky things, how do you know who the jerks are? I'm certainly not advocating being personally offensive to another individual; there are standards of decorum, manners, and courtesy for that. (See “jerk” in the prior sentence.) Hate speech, political speech, religious speech - it's all speech, and it gives the hearer an idea of what is in the speakers' heart.

And then - if a violation of the PC speech codes occurs, we get the calls for an apology. This, too, violates the principles of free speech; how “free” is speech that is demanded? If the offended party were to simply register their offense, then if the offending party cared that they had been offensive, they could choose to offer an apology. When was the last time you heard a demanded apology that was worth the time it took to listen to it? “I'm sorry IF you got offended by what I said” - that's not an apology for saying the words, it's an apology for the offense! It's almost like we're still in grade school. “Now, say you're sorry, Timmy…”

I also worry about generations reared with this viewpoint; if we're not tough enough to withstand words that we don't like, how in the world are we going to face down real evil? I believe there is a better way to handle that. If the words bother you, determine why they bother you; are they offensive words, do they point out your shortcomings, etc. Once you determine the source of the offense, you will know if you are dealing with a “the truth hurts” scenario, a “this person is a jerk” scenario, or a “that was unfair / inaccurate” scenario. You can then ignore the speech, change your ways, or register your offense, and move on. It's a much more productive way to deal with words that tried to hurt you.

I'll wrap up with this; if you regularly hear “racist dog-whistles” coming from your opponents, your opponents likely aren't the problem.

I've made no secret of the fact that I support Herman Cain as the Republican nominee for president in 2012. With his recent victory in a Florida straw poll and passing both Rick Perry and Mitt Romney in a recent Zogby poll, he's certainly on the rise, and going to be a player in this Republican primary season. However, if you watch the news or listen to the traditional pundits, you'd think that this is a 2-man race between Romney and Perry! 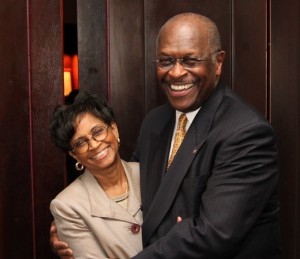 There have been some other “flashes” in the primary season so far, but each of them occurred after the candidate announced. Cain was one of the first declared candidates, and every time he talks, his numbers go up. One of the complaints many of us had in 2008 was that we felt that John McCain was selected by the media rather than elected by the people. “He's electable,” they said, “unlike these other guys…” To an extent, this is the prevailing narrative surrounding Perry and Romney; the former isn't electable, while the latter is.

The media doesn't want to acknowledge Cain, because he causes some problems in their view of the way politics in America works. (If the name wasn't already taken, maybe we'd call them “inconvenient truths”...) Let's take a look at these; rather than liabilities, these are strengths that will not only force conversation on these issues, but areas in which he resonates with the average American.

As a Democrat, this is a plus; as a Republican, this must mean that there's something wrong! (Yet we're the ones who are called racists - go figure.) Republicans have been pilloried as racists (or worse) for not supporting various Democrat candidates over the years - Jesse Jackson, Geraldine Ferraro, Barack Obama - with claims that we didn't support them because they were black or female. Why the “impartial” media amplifies these ridiculous claim is probably a bigger topic than we have time for here, but they are willing accomplices in painting the party of Lincoln as racists. Only in the affirmative-action-addled mind is one's race or gender a plus (if you're a minority) or minus (if you're a white male).

The media simply cannot abide a black man with a broad base of Republican support. I honestly believe that their minds are so steeped in their fantasy view of the world that they can't wrap their minds around this. This is a plus for him; his story of challenge-to-success is both authentic and inspiring. There was great celebration around Obama's election, which proved that racism was over; a week later, we started with the stories about how he was in danger because these racists wouldn't accept a black president. There is no appeasing these race-accusers; refuting their claims via our actions is the only thing that may silence them.

This blows up the media narrative as well. He isn't a low-to-medium-performing “diversity” hire (hired solely for his skin color), he has used his own education and work ethic to rise to the top. Through his two turnaround-CEO roles and his leadership of the National Restaurant Association, he has shown that you can get tangible results if you're willing to roll up your sleeves and do some hard work. While our current president was fomenting and organizing rage against the establishment (you do know what a “community organizer” does, right?), Herman Cain was working hard, making his businesses profitable, and stimulating both the national economy and the personal economies of his company's employees.

We should have known what we were in for, starting with the “present” votes in the Senate. Then, on to the ridiculously-named “Office of the President-Elect” (it's called a “transition team”), the job-killing health insurance mandate, two stimulus plans (plus an attempted third in the name of jobs) - I'm hard-pressed to think of a single program that the current administration has attempted that has actually made things better. It's time for a leader with proven results.

I think that the media doesn't know what that word means. Bob Dole and John McCain? Electable. Ronald Reagan and George W. Bush? Unelectable. Yeah, that must be in some AP style guide somewhere, that mandates the opposite use of that word. Maybe it's like with your kids, where they don't seem to hear the words “not” and “don't,” choosing instead to do whatever it is you just prohibited.

So - if you're expecting the “news” to inform you on Herman Cain, you're going to be waiting a while. If you think I'm off-base, research him and see for yourself. If you agree that the above sounds good, let's get together and work to make sure that Cain's success is so huge that even MSNBC can't ignore it!