Humor is good for the soul

After 40 hours of work in three days this week, I'm in the mood to laugh. I got this in an e-mail the other day, and I think it's just hilarious. Enjoy!

I just want to thank all of you for your educational emails over the past year. Thanks to you, I no longer open a public bathroom door without using a paper towel. I can't use the remote in a hotel room because I don't know what the last person was doing while flipping through the adult movie channels. I can't sit down on the hotel bedspread because I can only imagine what has happened on it since it was last washed.

I have trouble shaking hands with someone who has been driving because the number one past time while driving alone is picking your nose (although cell phone usage may be taking the number one spot). Eating a Little Debbie sends me on a guilt trip because I can only imagine how many gallons of trans fats I have consumed over the years. I can't touch any woman's purse for fear she has placed it on the floor of a public bathroom. Yuck!

I no longer worry about my soul because I have 363,214 angels looking out for me, and St. Theresa's novena has granted my every wish. I no longer eat KFC because their chickens are actually horrible mutant freaks with no eyes or feathers. I no longer use cancer-causing deodorants even though I smell like a water buffalo on a hot day.

Thanks to you, I have learned that my prayers only get answered if I forward an email to seven of my friends and make a wish within five minutes. Because of your concern I no longer drink Coca Cola because it can remove toilet stains. I no longer can buy gasoline without taking someone along to watch the car so a serial killer won't crawl in my back seat when I'm pumping gas.

Thanks to you, I can't use anyone's toilet but mine because a big brown African spider is lurking under the seat to cause me instant death when it bites my butt. And thanks to your great advice, I can't ever pick up $5.00 dropped in the parking lot because it probably was placed there by a sex molester waiting underneath my car to grab my leg. I can no longer drive my car because I can't buy gas from certain gas companies!

If you don't send this e-mail to at least 144,000 people in the next 70 minutes, a large dove with diarrhea will land on your head at 5:00 PM this afternoon and the fleas from 12 camels will infest your back, causing you to grow a hairy hump. I know this will occur because it actually happened to a friend of my next door neighbor's ex-mother-in-law's second husband's cousin's beautician…

Have a wonderful day….

No, not with Teresa… (Not with Britney either…)

(Update: the video formerly embedded here has been deleted.)

I know, the day after I post that I won't be here, I find this (strong language warning) over at Rachel Lucas's blog. This was simply too funny to not reblog.

This is a scene from The Daily Show with Jon Stewart, the faux-news show on Comedy Central. They took a patronizing look at the protesters in Berkeley, California, who are trying to shut down the Marine recruiting center. My favorite exchange comes starting at 3:12…

Code Pink Feather Boa'd Protester (CPFBP) - It is our responsibility, as the public, to shut this station down, to shut this recruiting station down.
Another Code Pink Protester - Code Pink stands for free speech.
CPFBP - It's very important to protect free speech, and so we clearly have the right to be here.
Rob Riggle, Reporter - If only there was an organization that was sworn to defend that free speech!
CPFBP - Wouldn't that be great?
Rob - That would be outstanding, right?

(Update: the embedded video has been removed at the source; glad I wrote the transcript!) 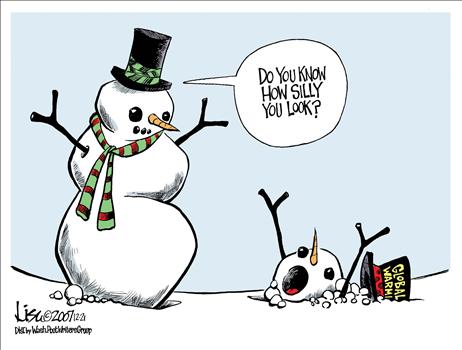 Last night, I was out for an evening run. I usually run in the mornings, or if not then, in the afternoons before supper. However, I hadn't gotten to it yet, and I needed to run, so I did it. I was struggling - but I was making it. I ran past these two kids playing around a stop sign, and as I passed, I heard one of the kids say…

Well, he's not going that fast.

I know I'm not the fastest runner - I'm not even in the top 70%. But… darn it, the kid could have waited until I was out of earshot. :P

Another busy time, another installment of “Plagiarism Is the Sincerest Form of Flattery”. See, when we re-blog here, we're honest and up-front. :)

Next up, a link to a pundit I never thought I'd link to, except as a set up to refute. However, Susan Estrich and I agree on this issue, which she details in "A Weak Moment for Women in Banning Larry Summers". (I don't agree that what he originally said was wrong - but the rest of it is spot-on.)

Via Morgan Freeberg, we have reports that "A Quiet Triumph May Be Brewing". Could it be that we've come up with a way to get most remaining al-Qaeda in the same place, then send them to their 72 virgins (or raisins, depending on the translation)?

And finally, we wrap up with some humor. Rachel Lucas learned to make thought and speech bubbles in PhotoShop, and produced a masterpiece she calls "Three Men and a Hillary". (Language warning in effect for the comments on that post…) 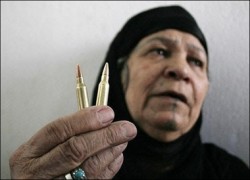 This propaganda is missing one crucial detail. If you don't know, put your mouse over the picture to find out. Even though this is categorized under “funny stuff,” it's more sad than funny.

Anyone who has sat through PowerPoint presentations can identify with this guy. This should be required viewing for all people who create these presentations, especially security briefings… (I haven't laughed this hard in a long time!)