I’m Not a Mac, but I’m Certainly Not PC

Did Bob Costas really refer to a black European Olympics medalist as an “African-American?” What kind of mindless politically correct stupidity is that?

And while we're on the subject, if an “African-American” who is actually from the United States wins a medal, how do the Olympics officials decide which African country gets to share the credit for that medal? Just wondering.

Still more ... if an African-American wins a gold medal, what national anthem do they play? Have they created some kind of medley?

One of the funniest things I remember was hearing someone referring to a person from Africa as an “African-American African.” It certainly does seem that, when exposed to global culture, the American PC-ese seems to range from misguided to offensive. The same people who cry the loudest over discrimination over ethnic origin are also the same people who make sure we can't look past ethnic origin, thereby making all people equal.

Somewhere, we seem to have swallowed whole the lie that what someone else says about us has to be true. If someone calls you ugly, are you ugly? If someone calls you mean, are you mean? If things worked like that, I'd just pay someone to call me a 6-foot, 3-inch Harrison Ford look-a-like!

Now, I'm not ignoring our country's trouble past when it comes to true equality, but I'm also not convinced that affirmative action and political correctness have gotten us any closer to that equality. To suggest that someone be color-blind is ridiculous; on the other hand, differences are not generally liabilities. This infatuation with words, though, is a trickier thing. Freedom of speech is important, as evidenced by its being enshrined as Article 1 in the Bill of Rights, yet political correctness is the complete opposite of this. If jerks are not allowed to say jerky things, how do you know who the jerks are? I'm certainly not advocating being personally offensive to another individual; there are standards of decorum, manners, and courtesy for that. (See “jerk” in the prior sentence.) Hate speech, political speech, religious speech - it's all speech, and it gives the hearer an idea of what is in the speakers' heart.

And then - if a violation of the PC speech codes occurs, we get the calls for an apology. This, too, violates the principles of free speech; how “free” is speech that is demanded? If the offended party were to simply register their offense, then if the offending party cared that they had been offensive, they could choose to offer an apology. When was the last time you heard a demanded apology that was worth the time it took to listen to it? “I'm sorry IF you got offended by what I said” - that's not an apology for saying the words, it's an apology for the offense! It's almost like we're still in grade school. “Now, say you're sorry, Timmy…”

I also worry about generations reared with this viewpoint; if we're not tough enough to withstand words that we don't like, how in the world are we going to face down real evil? I believe there is a better way to handle that. If the words bother you, determine why they bother you; are they offensive words, do they point out your shortcomings, etc. Once you determine the source of the offense, you will know if you are dealing with a “the truth hurts” scenario, a “this person is a jerk” scenario, or a “that was unfair / inaccurate” scenario. You can then ignore the speech, change your ways, or register your offense, and move on. It's a much more productive way to deal with words that tried to hurt you.

I'll wrap up with this; if you regularly hear “racist dog-whistles” coming from your opponents, your opponents likely aren't the problem.

First up is the latest column from Thomas Sowell entitled “Subsidizing Bad Decisions” in which he asks a very good question - “Why should taxpayers who live in apartments, perhaps because they did not feel that they could afford to buy a house, be forced to subsidize other people who could not afford to buy a house, but who went ahead and bought one anyway?” Read the whole thing, particularly the part where he talks about “saving for a rainy day” and “sadder but wiser.” I'd planned a longer post on the economy (and I still may do that), but this is pretty much the way I feel about it.

And, backing him up is some timeless advice from Adrian Pierce Rogers, via Neal Boortz…

You cannot legislate the poor into freedom by legislating the wealthy out of freedom. What one person receives without working for, another person must work for without receiving. The government cannot give to anybody anything that the government does not first take from somebody else. When half of the people get the idea that they do not have to work because the other half is going to take care of them, and when the other half gets the idea that it does no good to work because somebody else is going to get what they work for, that, my dear friend, is about the end of any nation. You cannot multiply wealth by dividing it.

If only Washington, D. C. understood that simple truth.

With less than two weeks to Election Day, here's a mini “Plagiarism Is the Sincerest Form of Flattery” post.

First up is Neal Boortz. He writes an open letter to the undecided voter. It's a long letter - you'll probably need 10-15 minutes to read it all. But, I found it very interesting - one of the things I've enjoyed this political season is seeing how people interpret what's going on. You can see where they've been, and how they see the issues based on their experience.

Next is an image blatantly swiped from Morgan Freeberg. Sums up poor Joe the Plumber's treatment pretty well, I think… 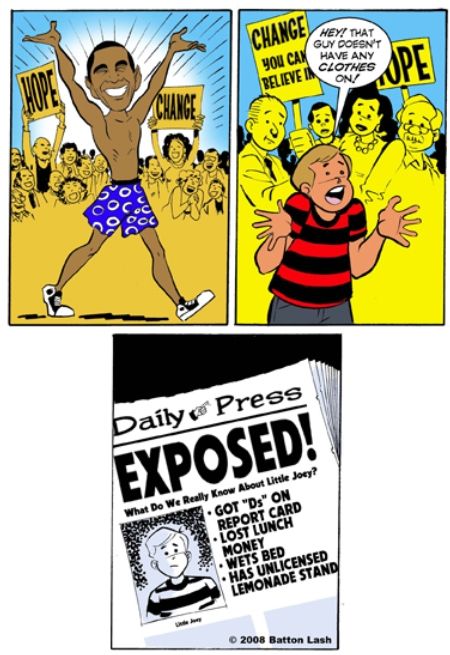 Morgan also had a good line about Joe.

Joe the Plumber does not make 250,000 dollars a year. He doesn't even make close to that.

He just wants to.

So, Joe is opposed to taxing people who make more than $250k because he wants to be one of those people in the future. Could it be that people are engaging their brains, instead of mindlessly buying into the class warfare schtick of the left?

employment. It turns out that July turned out to be a really bad month for teenage employment - the typical person seeking minimum-wage employment.

Last month, President Bush lifted the ban on offshore drilling, and crude prices dropped $10/barrel almost overnight. We can't drill our way out of this situation, we kept being told (Morgan Freeberg makes mincemeat of that ridiculous phrase); but, when one of the two restrictions on offshore drilling are lifted, the price plummets.

The Godfather points out an AP release in which, all of a sudden, they determine that “trickle-down economics” actually exists! When “rich” people don't get as much money, they don't give as much, or they don't hire as much.

Why I Write about Economics

Via Neal Boortz (4th item - archive page will work tomorrow), there is a perfect example on why I write about economic theory and policy. The question to the man on the street was “Should Congress continue to fund National Public Radio?” (NPR, for those of you in Rio Linda.) The response from one person, that was selected and printed…

I so wish that was a joke, but it's not. This person is merely indicative of a large segment of our society that does not realize that Congress has no money to spend but the taxpayer's money.

Wouldn't it be great if today was just another day? (A pay day, no less, if you get paid on the 1st and 15th like I do!) There is an alternate tax plan called the FairTax that eliminates the IRS and the millions of dollars spent complying with today's extremely complex tax code. (Do you realize that the cost of this compliance is embedded in both the cost of things you buy, and in the wages that your employer can pay you?) Neal Boortz, one of the co-authors of The FairTax Book and FairTax - The Truth: Answering the Critics, has put chapter 13 of the latter book online, where it can be read for free. It paints a vivid contrast between our current tax system and the FairTax.

If you're ticked about the money you had to pay, take a look at the FairTax. If you like it, tell your friendly Congress-critter so.

Another busy time, another installment of “Plagiarism Is the Sincerest Form of Flattery”. See, when we re-blog here, we're honest and up-front. :)

Next up, a link to a pundit I never thought I'd link to, except as a set up to refute. However, Susan Estrich and I agree on this issue, which she details in "A Weak Moment for Women in Banning Larry Summers". (I don't agree that what he originally said was wrong - but the rest of it is spot-on.)

Via Morgan Freeberg, we have reports that "A Quiet Triumph May Be Brewing". Could it be that we've come up with a way to get most remaining al-Qaeda in the same place, then send them to their 72 virgins (or raisins, depending on the translation)?

And finally, we wrap up with some humor. Rachel Lucas learned to make thought and speech bubbles in PhotoShop, and produced a masterpiece she calls "Three Men and a Hillary". (Language warning in effect for the comments on that post…)