(OK - that's counting years I missed it. Not missing it this year…) 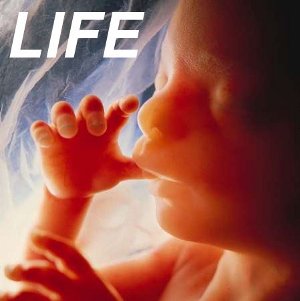 This year, Sanctity of Human Life Sunday has been expanded to Sanctity of Human Life Week, beginning 17 Jan 10. The image you see to the left will be my profile picture on Facebook for the duration of this week. These days, with medical technology being what it is, the argument against abortion is really quite simple. Back in 1973, when Roe v. Wade was decided, ultrasound was in its infancy (pardon the pun). We had no clue, comparatively, to what goes on inside a womb the way we do today. Most babies' hearts are beating before their mothers realizes they are pregnant. All the activity that goes on in there is amazing, and 3-D and 4-D ultrasounds have opened up this world to us.

What's the difference if the baby is drinking through a tube or through its mouth? We don't euthanize preemies that have to have feeding tubes; and even after birth, the mother has the responsibility of feeding her baby. There are periods during pregnancy now when, depending on what the mother wants, she can either have a preemie (who, though challenged, will probably make it), or an abortion. Is that the “choice” that the pro-choice crowd is for? Why is it that, during this most precarious time, when they need protecting the most, people feel entitled to snuff out that life? There's a reason that I call my abortion category “Prenatal Murder” - that's exactly what it is.

There's a Haiti-a-day going on in the wombs of women around the world. These precious babies' voices are too soft to be heard - will you speak up for them?