Good News and a Good Lesson

Today's Albuquerque Journal (website) had a couple of front-page stories that caught my eye. First, the one full of good news was titled "Others' Message to Illegal Immigrants: Leave!" The Journal doesn't put their stories online to link to, so I'll quote enough of it to give you the idea…

The goal? To drive them away.

In Oklahoma, where a set of laws known as the Oklahoma Taxpayer and Citizen Protection Act took effect Nov. 1, Latino churches have reported losing up to 20 percent of their members and Tulsa County alone estimates a population exodus of 25,000 people, mostly foreign born.

Sounds like that's a law that has actually done what it set out to do! And kudos to the Journal reporter, Leslie Linthicum, for including that oft-excluded qualifier illegal when describing the people being targeted by the legislation. (That wasn't the case through the entire article, but it was refreshing to see it.)

The instructive article was the one beside it entitled “Fast Track: Critics Say Rising Rail Runner Tab Slows Road Work.” The Rail Runner is pretty cool - I've ridden it with our Cub Scout pack. It's a light rail passenger train that goes from about 20 miles south of Albuquerque to about 15 miles north of Albuquerque, but will eventually extend to Santa Fe. It's been in operation just over a year.

The article had a lot of information about how it (and lots of highway improvements) came about, through legislation passed in 2003 called Governor Richardson's Investment Partnership (GRIP). The initial estimates for the Rail Runner was $90.2 million, but the current expected total cost is $420 million (plus $50 million in escrow, to address “issues” that may arise). This in and of itself has some folks upset. However, the way the GRIP legislation was written, funding can be shifted amongst the several projects - and, because the Rail Runner has such high visibility, money has been diverted from highway improvements to the Rail Runner.

The instructive part, to me, is the cost balloon. Whether the Richardson administration willfully underestimated the cost, or whether it has simply grown due to unanticipated costs, I don't know. It's probably some of both, and it's not really important to the lesson I think we can learn. As an example - New Mexico did not even apply for federal funding of the Santa Fe leg of the Rail Runner. Why?

Rail Runner officials last summer cited problems with grant program rules and the limited federal funds available as reasons for not applying for the money.

And the state was working on a fast track.

A legislative analysis from 2005 stated that the process of applying for federal funds could have delayed the second phase for up to several years - beyond the December 2008 deadline the Richardson administration had set.

“The project needs to be proposed and there are a lot of requirements necessary,” [Federal Transit Administration spokesman Paul] Grasso said. “There's an environmental review that has to be done; there's a cost effectiveness standard that has to be met. There are all kinds of things that have to be worked out in advance.”

Any government entitlement program costs more than originally estimated - every single one. It will take longer and cost more than the original estimate every time. So, when you hear politicians (especially now during campaign season) pitching their programs, remember that. $400 million today is probably $3 billion once implemented.

What’s Wrong with This Picture? 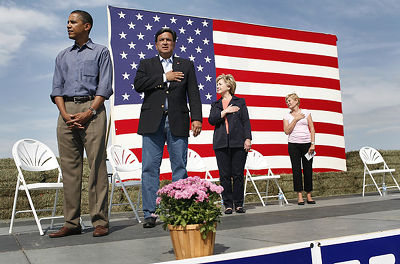 I guess he's covered up what he values…