Previously in this series - Part 1: Introduction • Part 2: Credit and Banks

Income inequality. The rallying cry of the Occupy Wall Street crowd really rings hollow with this 99%-er. This is certainly not a new complaint; “eat the rich” has been a sentiment for decades (or centuries). I would posit that covetousness has existed for over 6,000 years, and led to the first recorded murder in human history. It was wrong then, just as it is wrong now. Now, this is education, not church; we're not going to belabor this point too much. But, the cries of “fairness” are a moral appeal, and must be dealt with accordingly. The ultimate in fairness is that everyone is taxed the same, and paid the same wage for the same type of work. Some people believe this is way-unfair, and they seem to start with “from each according to his ability, to each according to his need” and work backward just enough to make it palatable to someone who claims to desire freedom. Know, as we enter this education, that I'm much more on the former end than the latter. (See the “Welcome to the Real World” heading in the introduction.)

Income inequality would be incomplete without a discussion of equality of opportunity. Think back over your life; have you ever had a friend who could out-eat everyone else, but still retained their beanpole-like physique? Did you also have a friend who was always dieting, and always looked like they should be dieting? Given an equal opportunity - a pizza and birthday cake celebration, for example - these two people will have unequal results. This is exactly how it is in life. Many different people take the same high school courses; some do well, others do not. Does the fact that everyone is not the valedictorian mean that the system is not fair? On the contrary, this illustrates that given equal opportunity, different results are possible (and likely). There';s a phrase that originate with cars, but now is used for almost anything - “Your mileage may vary” (YMMV). This is an acknowledgement by car companies that, the way they drove the car, in the environment they had, that was the mileage they got; but, you may drive it a different way, or in a different environment, so your mileage may not be the same as what's printed on the sticker in the window. 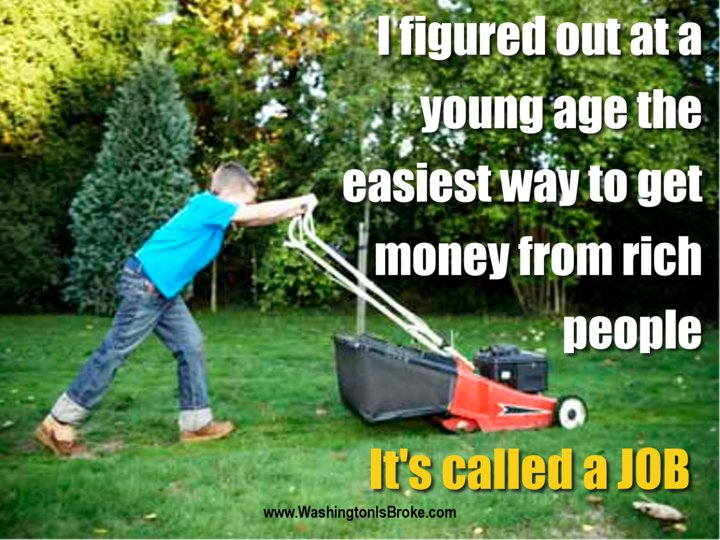 Now, let's continue this train of thought. There are two people who get the same college degree; let's even say that their GPA was the same, and it was good - they graduated Cum Laude. Fast-forward 5 years, and the likelihood of these two individuals bringing in the exact same salary is very low; one is going to be making more than the other. Is this fair? That's tough to say, but just with these facts, it seems pretty fair to me. Going back to the introduction again, a college degree is a tool, and what one does with it has a lot to do with their decisions, and also has a lot to do with the environment in which they live. Think about it this way - the same hammer that demolishes a house can be used to hit a chisel to make a sculpture; and, depending on the scenario, both are important. However, the demolisher is probably not going to get paid the same as the sculptor.

How many people could you employ? I know my answer to that question - zero. I have a small programming business, and currently, I am at the point of breaking even. Over the course of 2+ years, I saw a project with potential to go nationwide fizzle and die; the work I put into that is gone, with no monetary return. I went from looking at a breakthrough project to being back to square 2 (not quite back to square 1) overnight. What am I doing? Continuing on, keeping the lessons learned in mind. I'm not camping out in front of the organization that didn't choose me, and I'm not blaming the system. But, I can assure you that there is no room in my budget for any employees at all.

Businesses can only hire people as they have resources to do so. These resource quite often manifest themselves as stores of money saved and earned via profits. There is nothing wrong with businesses making a profit, just as there is nothing wrong with you exchanging an hour of your time for a profit yourself (via a wage). (For the record - who was one of the voices saying that a rise in the minimum wage would lead to fewer available jobs? Oh yeah - me. I take little pleasure in that vindication, but I'd be remiss if I didn't point it out.)

To illustrate, let's look at a hospital. Profit is a motivation even in a seemly-altruistic endeavor like health care. The operators of the hospital are responsible for hiring doctors, surgeons, nurses, nursing aides, medical technicians, janitorial staff, laundry personnel, anesthesiologists, etc. (or contracting it out). They are also responsible for purchasing beds, linens, cleaning supplies, medical supplies, and a full array of drugs; they also must maintain power, water, environment, and maintenance on their facilities. (I'm stopping there; I'm sure this list is incomplete.) The janitors and surgeons are both important; however, you're not going to find a single hospital that pays janitors as well as it pays surgeons. Why? Two words - skill and education. Is that fair? Absolutely. The additional pay surgeons receive over janitors is a big reason many of them go through years and years of schooling, internships, and career-long continuing education.

Now, imagine you're the surgeon. Would you think it fair if unemployed people demanded that you reduce your pay to that of the janitorial staff? If you say you'd be OK with that, you're either naive or lying. But, these people get their way, and your pay is cut. You would be indignant that the fruits of your hard work were being demanded by people who have no claim on them. You would also no longer be able to pay the support staff necessary for your surgery practice, nor would you be able to spot the neighborhood kid the $50 to keep your yard up on a weekly basis. You would have to pull your children out of whatever private school they attend, which affects the teachers and workers at that school.

To put it as plain and simple as I can, these “rich” people you decry are the ones making our economy work. And, in our economy, you start where you start and try to improve your lot. That's the promise of America. Not everyone will succeed, but the opportunity is there for those willing to work for it. For years, one party has fomented angst against one class of people, while pillorying those who are against that party as filled with hate. (Oh wait - maybe those are big words for college-educated people…) The Democrats make people mad about people who run businesses, and cast Republicans as hating poor people. Like many items of the Democrat platform, nothing could be further from the truth. These rich people are the ones employing people and supporting other businesses; they're not sitting around their fireplaces smoking $100 bills and laughing at the peasants.

The graph running down the side of the post, as best I can tell, originated here, and was produced as an example of how bad Herman Cain's 9-9-9 plan is. But, what I'd like for you to do is click on that, and look how tiny the increased tax is on the bottom 20% versus how much it saves the top 20%. (Keep in mind, #OWS-ers, that 19% of that top 20% are in your 99%.) This chart illustrates perfectly what is wrong with our tax code, and why our jobs are going to other countries. Where is the motivation to move yourself into that top 20%? (FTR, I am saddened by Cain's recent adjustment to 9-0-9 “for poor people” - this completely destroys the beauty of 9-9-9 as an equalizer.)

At this point, I can hear the rebuttals about all the greedy people who have broken the law to increase their wealth. Those people will find no quarter here with me. One of my biggest problems with immigration reform is that the focus is always on the illegals, rather than the businesses who hire them with impunity. However, this greed and illegality must be fought where it is found, not via a whole-scale war on wealth. American has her position in the world because of her wealth! If profiling is so wrong in other areas, why is tolerated here?

Bottom line - instead of seeing these people as the enemy, you should see them as people you should emulate, whose accomplishments to which you should aspire. You should stop looking at what someone else has, and start looking at how you can improve your lot in life. Chase Bank is probably not hiring many Gender Studies graduates, and Exxon doesn't have a great need for Gay and Lesbian Studies graduates. You may not find a job in your degree specialty - that's OK. Work where you can find it, continue your education (but by all means, not at the same university that failed you so much already), and quit looking around so much.

Derek Sivers, in his summary of Barry Schwartz's The Paradox of Choice, puts it this way.

Can you see the lunacy in this? Because of their jealousy and covetousness, over half the people would choose half as much pay. This is exactly what you're doing. Wake up, #OWS.