Jameson Reese Summers, our third child, was born on February 28th, 2005. His story is nothing short of a miracle, and I'd like to share it with you.

Back in 2000, when our second son Jordan was born, my wife Michelle had some complications. By the time her second C-section had healed, she had hernias all across her abdomen. The surgery to heal these involved placing mesh from hip to hip, and from her pelvis to the middle of her abdomen. Once in, this mesh fuses not only to the layers around the hernias, but also to the internal organs. We were told that our childbearing days needed to be over - this mesh would significantly complicate any future pregnancy.

In November of 2003, Michelle was diagnosed with post-strep GN, an auto-immune kidney disease, where once the body finishes fighting off a bout of strep throat, it turns towards the kidneys. By the time this was diagnosed, her kidneys were in very bad shape, and we were told that it would be over a year before they would be back to normal. In addition, our plan was working well - our two children were growing up, both potty-trained, and we were quite happy with our family.

In July of 2004, we learned that we were expecting our third child. Nearly everyone involved in my wife's health care tried to convince her to terminate the pregnancy. One notable exception was her OB, Dr. Keith Martin of OB/GYN Associates of Montgomery, who knew us from our second birth, and knew we would not be interested. Instead, he immediately began researching and consulting with her other doctors, and came up with a plan. We were praying for the baby to reach 24 weeks, after which point his chances of survival outside the womb would be much greater. 24 weeks came and went, and Jameson was still there! We were thankful for any days we got past that.

At 33 weeks, Michelle was hospitalized due to blood pressure fluctuations. We thought that the delivery day was just around the corner, but instead, the doctors gave Jameson a couple of steroid shots to mature his lungs, then sent Michelle home on bed rest, with twice-weekly appointments. At the 35-week appointment, Dr. Martin said that he was convinced that Jameson would do okay at 36 weeks, and that we would schedule it for the next Monday, which was exactly 36 weeks.

Of course, you've already figured out that Jameson was born, and that he is doing fine. The C-section at 36 weeks was done for the benefit of Michelle's health - her kidneys were really struggling, filtering for two while being squished! But, when Jameson was born, he had his umbilical cord around his neck, along with a knot in his cord. These are serious conditions - he would not have made it many more days with that knot in his cord. This was the perfect time for him to be born.

There are too many things that worked out for this to be mere chance. God had His hand on Michelle and Jameson, throughout the whole time. Dr. Martin worked overtime on managing Michelle's care, and when the general surgeon who had been scheduled to help with the mesh didn't show, he and one of his partners completed the very complicated C-section. Jameson truly is our miracle baby.

Of course, I wouldn't make you read all the way to here and not include a picture… :) 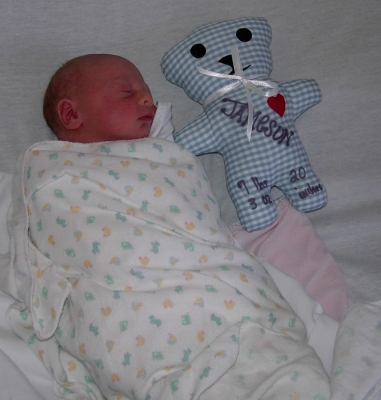